I’m Not Doing Maori-Here They Are

I decided not to do the Maori Wars.  I am interested, but the lack of suitable and readily available 15mm figures  put me off.  Also, while I’ve read a bit including some excellent blogs like this one

I realise I don’t know enough yet.  The appeal of the Pa and the Haka still lingers though. Not least because I've met some interesting Maori folk in my time.

I have just bought a DVD of the acclaimed Anglo-Maori War film UTU!  I missed it first time around in the 80s but never lost interest. I'ts a German release and seems to be a first for region 2. It’s a good film by anyone’s standards. Naturally it made me think once again about my decision.

As it happens I have about half a dozen African figures from Irregular and they are currently without a project to call their own.  They all have guns and some sort of skirt or loin cloth. Of course I’m still in the grip of conversion mania – people are scared to enter the house in case they are immediately modified with Green Stuff.

Well, you can guess the rest, so here’s the before. 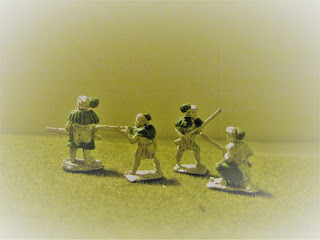 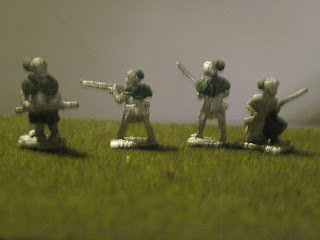 The finished figures will appear shortly once I've added feathers and Meres and such like and painted them.  Tattoos in 15mm, that will be interesting.

Now this does not necessarily mean I will be turning out Regulars and Rangers and Militia and more Maori for TMWWBK.  No, not at the moment-but you could say it is a significant step.


The Maori were fond of the shot gun a trait they shared with the Xhosa who also liked a scrap in close country.  Shot guns aren’t much use at a distance but at close range they’re a hellish weapon. Tactically then the Imperials should endeavour to optimise their long and medium range fire power while the Maori should favour opening up at point blank.

In terms of TMWWBK I think the Maori could be either Veteran Irregular Infantry with Field Craft at 6 points or Tribal Infantry but hitting when firing on a 5 rather than just a 6. That would be the shot gun effect and I’d cost such a unit at 4 points rather than 3.  So, around 5 units then.

Such a unit would absolutely murderous in close combat so the trick would be to stop them getting too close.  If that means a major emphasis on scouting and occasionally firing blind into the Fern so be it.  Period flavour you might say.

Now speaking of the Mersey-Leck school of tabletop fun you may know that we can expect a new Osprey Rule Book from them in 2019.  It will be called Rebels and Patriots and naturally enough it's aimed at war in the Americas.  Here's a link to Michael's blog.

I've no doubt it will be very good but what excites me is that it's intended to cover everything from the French and Indian War through to the ACW-including the Mexican War.  Five minutes considering the Mexican Army and the 1812 British and you quickly realise we are going to have the official view on Nap' Rampant stats.

There's Ridgeway to consider too.  I'd decided not to do Ridgeway or Maori or the Cape Wars.
Posted by Unknown at 19:07